“I have experienced for myself what those imprisoned in the late 1930s were feeling. Now I know the words to convey their pain, indignation and hurt, the bitterness of separation from their dear ones. Now I know how dispiriting it is, this waiting: ‘They’ll sort things out and let me go — I’ve done absolutely nothing wrong.’

“I know many of those imprisoned then by name. I know how their sufferings in detention ended. I know that from this same cell people were led out to be shot. I know where they were assembled in a transport and the steps down which they were led to the prison courtyard and loaded into trucks. Now I myself walk along the same corridors; I go down the same steps to that very same courtyard. 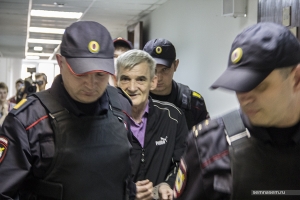 “Eighty years have passed, but nothing has changed — at least in its outward appearance. Perhaps the guards have become a little more humane and the trucks, just a bit newer.”

Yury DMITRIEV
from Petrozavodsk Detention Centre No 1.
Excerpt from a letter to Natalya Klyuchareva in Yaroslavl

Anyone wishing to write to Yury Dmitriev, should send their letter, including a self-addressed envelope, to the following address: