On Thursday, 30 November, the hearing continued of the case against historian YURY DMITRIEV, accused of producing pornographic images. The court rejected the defence petition for the removal of the Federal Department of Independent Forensic Assessment from the case, reported Dmitriev’s defence attorney VICTOR ANUFRIEV.

Anufriev said he had information that the Arbitration Court in St Petersburg was examining several applications involving the so-called Federal Department: the organisation was on the verge of liquidation as a legally-constituted entity, added Anufriev: that was the main reason for the defence petition for its dismissal from the trial.

“Judge Nosova said that the applications to the Arbitration Court were now under examination, but that documents confirming that the Federal Department has been excluded from the list of judicial entities had not been presented. Consequently, the organisation could continue its activities,” Victor Anufriev informed us. “No grounds for dismissing the Federal Department, therefore, had been found.”

Dmitriev’s defence attorney already submitted a petition in early October for the organisation to be removed from the case. In his view, an organisation such as the Federal Department of Independent Forensic Assessment, with a statutory capital of 10,000 roubles [80 US dollars, at street exchange rates] was incapable of carrying out such an expert assessment of the evidence. Neither then nor now, however, did the court consider the arguments of Mr Dmitriev’s defence.

The next hearing of the case will take place on Tuesday and Wednesday, 26-27 December 2017.

The long interval is to allow the defence attorney to examine the expert assessment of the photographic evidence in detail. The findings of the Federal Department will be available no earlier than Monday, 11 December. 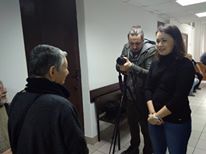