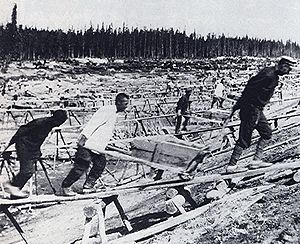 Seventy years later, in August 2003, Yury DMITRIEV discovered a large burial ground of BelBaltlag prisoners near the 8th lock on the White Sea Canal. The following year volunteers under his direction cleared the area and found more than 800 graves.

After work on the canal was completed on 4 August 1933, over twelve thousand prisoners were released and terms of imprisonment in the camps were reduced for a further 59,516 inmates of the White Sea-Baltic camp complex. Six major OGPU officials were decorated with the Order of Lenin for their management of the construction work (G.G. Yagoda, M.D. Berman, I.L. Kogan, Ya.D. Rappaport, S.G. Firin and N.A. Frenkel), as were two amnestied engineers,  Zhuk and Verzhbitsky.

In May 1933 the head of OGPU, Genrikh Yagoda, reported to Stalin about the state of the project. Construction was completed on 20 June 1933, and the canal was named in honour of Stalin. On 25 June it opened for water-borne traffic and the steamboat “Chekist” travelled along the canal from one end to the other.

In July 1933 Stalin, Kliment Voroshilov and Sergei Kirov — People’s Commissar for Military and Naval Affairs and Party boss of the Leningrad Region, respectively — travelled along the new man-made waterway in a cruiser. Privately, it was said, Stalin was dissatisfied with the canal: it was narrow and no more than 3.65 metres deep at the time.

The “White Sea Canal” brand of cheap Soviet papirosy (cigarettes with a cardboard filter). The words “smoking is bad for your health” can just be made out, upside down, to the right of the rent in the packet.